Today’s title says “Swimming EXPO.”  It seems at this time of year, many of the schools in & around Athens have “open days” of sorts; a combination of carnival and showcase of progress and projects around the school. Kessaris’ Open Day was April 28 — the kindergarten and pre-K hosted a Bazaar of various crafts and projects from their studies this Spring, Michael’s class performed a play, the basketball teams showed off their skills, the art program hosted a gallery and the robotics program had a lego display. This morning, the swim program at school held its own expo, where the students who participate in this elective (it’s held during the school day like an extra gym class) got to show their parents, grandparents and classmates what they have learned over the past 9 months. 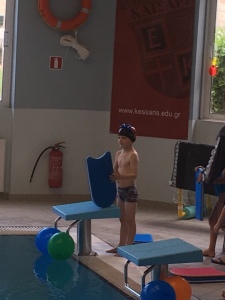 Demetri is in Barcelona for Race2Adventure, so Papou and I went today.  The program started with the three year olds, then the Pre-K 4 kiddos. Nipio (kindergarten) was next.  Peter marched straight out of the locker room, cap on, kick board in hand, and climbed up to his starting block.  He and his friends Demetris, Gianni, Anastasia, Sylvia, Eva and others got in position and jumped in and swam the length.  They climbed out and did it again, this time doing one hand at a time on the kick board, freestyle. Then again on their backs.  The finale was a dive (kind of a flying leap for most of these little ones) through a hula hoop.  It was unbelievably cute.  They were all very serious and very good listeners.  Many of the kids waved to their parents; some even while they were in the water.

Michael’s class came next. The title picture above is his group: Michael is third from the left, with his pal Kostantinos and his classmates Demetris, Georgios, Haralabos, and Panagiotis. Penelope, Aphrodite and Marianiki are on the right.  Michael’s teacher brought the students who don’t swim or play tennis to the pool so they could cheer for their buddies.  Michael’s exercises were similar to Peter’s class: breast stroke, freestyle, and backstroke.  Michael is a little bullet  backstroker.  He and Kostantinos were neck in neck for a lot of it.  Kostantinos is in a different 2nd grade class, but he swims and plays basketball with Michael and they are in the same bilingual English class together.  The two boys are a lot alike: quiet, sweet, shy — so they liked each other immediately but it took them a while to form their friendship.  His bilingual English classmates were Michael’s first friends. There are only five of them in the class but they are all fluent in English so he could communicate with them from the first day.  Their finale also was a dive through a hula hoop and at this age the diving was terrific. They swam along the bottom of the pool across to the other ladder without a breath. 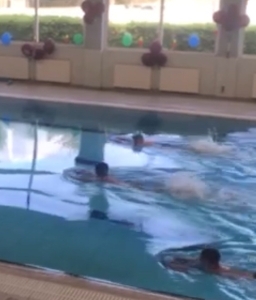 Papou was an excellent cheerleader.  Demetri talks about how his dad used to come to his highschool wrestling matches and yell “GOOOOOOOOO DEMETREEEEEEE!” loudly from the stands. He did the same thing today for the boys.  (Demetri says that his wrestling teammates liked Papou’s enthusiasm so much that they asked Demetri if maybe Papou could cheer for them, too.)

I’m glad the school staff knows me a little bit now and understands that I’m just an emotional mom.  The first day of school I was in tears out of fear.  Today my tears were different — from my exploding heart.  We stopped going to the beach (oil spill) about the time that swimming started at school, so Demetri and I haven’t really seen the boys’ much-improved skills.  They have become real swimmers!  It was a total thrill to watch.

The next end-of-year showcase will be next week when the Nipio presents their project on “The Secrets of the Sea,” along with a play that the drama department and kinder teachers wrote and directed.  We cannot wait.