The purchase of a car necessitated a road trip.  We returned the car (story in a future post) but we went on the road trip anyway in a rental.  The Peloponnese are the ‘fingers’ to the west of the mainland.  It is a beautiful area.  We spent time on the far west coast (Pilos, Stupa, Kalamata, Costa Navarino) in 2014. In 2016, we spent a long weekend in Loutraki, near the Corinth canal.  The Peloponnese region was quite significant in Greek history — the Peloponnesian Wars (431-404 BC) essentially took power away from the Athens city-state, and established Sparta, the leading power of the Peloponnesian League as the dominant force. These wars were the abrupt end of the golden age of ancient Greece.

This time, our destination was a town called Korfos, a village on the sea.  Papou and Sandy came too and we had a little townhouse with a lovely garden that was just up from the water.  We crossed the Corinth canal, stopping to watch some boats travel through, arrived about 5 pm, swam at the pool, had some wine and snacks, and went to dinner later at a little Taverna on the water.

The next morning, the four of us drove to the ancient Theater of Epidavros. Built in the 6th Century BC, it is one of the most perfectly preserved sites from its time.  The acoustics are terrific — we could hear a coin drop on the stage while we were at the very top.  In the same site was a temple dedicated to Apollo Meleatas, a god with healing properties, and the Asclepieion, the seat of antiquity’s physician god — people started worshipping him in the 6th century. There were also dormitories, a stadium, and ancient market.

We left Epidavros and drove to Porto Cheli, a little harbor town. From there we took a water taxi to the island of Spetsis, one the Saronic islands.  Spetsis is adorable. No cars are allowed, so you get around by motor scooter, taxi or horse carriage. We stopped for a late lunch near the harbor and wandered down the streets lined with lovely boutiques and shops.  Then we took a quick swim, diving into the ocean from a pier.  It was terribly hot so our tempers and bodies cooled down nicely with a little swimming.  Then we took a water taxi back to Porto Cheli and the car, and drove along the coast back to Korfos.  Papou and Sandy spent the day closer to home at Metamorfosi and other towns.  Demetri, Sandy and I have all just finished Blue Skies and Black Olives, a really funny father/son account of building a house in Greece.  Demetri found the house on our way back, and though Papou felt we should knock on the door and tell him how much we enjoyed the read, we didn’t.  We stopped for ice cream in Galatsas and headed home.

Saturday we woke late, swam in the pool for a little while, and drove to Drepano Beach. Saw many goats and goat herders along the way.  Papou’s first cousin Elena — a Greek who has lived in Florence since birth — spends summers in Drepano.  Elena is funny, charismatic, and full of life.  The perfect mix of what an Italian Greek should be.  The water in Drepano is the best I’ve ever seen. The beach is rocky, but the water in the ocean has soft sand for miles.  The water was so clear it looked like a swimming pool with a sand bottom.  We swam for a bit, then went back to Elena’s apartment for a linguine with mushrooms and truffles pasta lunch.  It was her husband’s birthday (Massimo).  There was champagne, fresh cheese from Florence and Greece, and the most beautiful fruit tart birthday cake with grapes, figs, apples and plums.  Elena’s brother (Renato) and his wife (Ornella) also joined us.  I didn’t know until yesterday that Papou speaks Italian, so he was the hardest working guy at the party, translating from Greek to English to Italian to English and back to Greek. 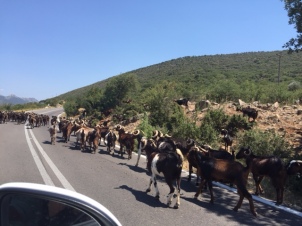 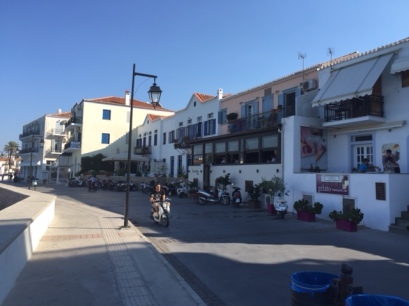