Cuddles the Tiger, Orange Julius, Panther, Mickey Mouse, Cuddles Junior (CJ), Clementine, Mama, Shadow, Lloyd. Just a few of the cats we’ve befriended and renamed. For example, Shadow’s real name is Apostoles. But he followed Michael and Peter so much… well you get it.

Anyone who has been to Greece has seen the cats in the streets and alleys, in the tavernas and hotels. In fact, the tourist shops have postcards, posters and t-shirts with “the cats of Greece.” They are everywhere.

What’s really interesting is that they are strays, except not really. There’s a family – or maybe they’re all just housemates – of cats that live, from what we can tell, under the building next door. Most of them are skittish, but they are well fed. Walking by the gates of that building you see all kinds of bowls. I’ve seen at least three different people feed them. One day in the supermarket, I looked down into my cart and saw five cans of cat food. I reminded Demetri that we do not in fact have a cat … and he looked at me like I was nuts.

The Plateia has even more. Tons of cats hang out near the dumpsters of the tavernas and some are brave enough to saunter around the tables. One of the servers we’ve become friendly with feeds them all before he leaves. And by “feeds them,” I mean pork, and chicken. None of this cat food nonsense. They follow him to the bench and they sit together for 30 mins or more.

Our favorite is a brownish gray female tabby whom Peter calls Cuddles. She jumps up on the planter next to the door, loves to be pet and meows loudly the entire time. She loves the affection and the food (Papou feeds her too), but it stops there. She is not interested labels – especially that of “traditional pet.” Once Demetri tried to sneak her upstairs and it sounded as if a murder was being committed in the elevator.

So … we meet her on her terms. Though lately she’s keeping her distance — Demetri went down to feed her one evening and she jumped up and clocked herself when her head hit the plate Demetri was holding. So now, Peter hops the fence after school to go find her. And she lets him love and feed her.

We don’t think she’ll want to leave her plush life in Voula, but we make up stories about her moving to Colorado. I think she’d give the foxes a run for their money. Especially when it comes to chickens.

Today marks 10 years since my dad’s death. I can’t say he passed away because to me that phrase conjures images of peace and calm. Instead his death was pure shock.  He was just gone. He had pants from Lands End sitting on his dresser he hadn’t even tried on; they had arrived the day before.  So much has changed and so many great things have happened. And while his absence has gotten easier to manage, it’s not any less sad.  More than anything I wish he got the chance to retire and be a Grandpa.  And what kind of a grandfather would he be?  Would hold and feed them as babies? Would he relay awful jokes? Would he bring them impossible math problems to solve? Would he insist to me that the learn to drive a standard transmission? Would his dancing have improved? Would he approve of our year away? I wonder what Michael and Peter would like about him and if any of it would be the same stuff I liked.  I wonder what he would tell the boys about himself that I never knew.

I miss you every day, Dad.  I think you’d really like Greece and the rocky cliffs.  We’ve only seen one lighthouse so far, but we’re looking for you in all of them.

Demetri and I were married 12 years ago today.  The heat has been fierce the last few days  — 39, 41, 43 degrees (98-103 Farenheit!) The ‘sea’ as the Greeks call it, is at the end of our street, so today we grabbed goggles, towels and shoes and walked right down. The water is already so warm that you’re glad for the pockets of cool water that find you every so often.  We swam for a while, found some shade under a tree and then walked home. Cousin Theodoris came to visit for a while, and Papou and Sandy offered to babysit the boys tonight – they walked to the square for dinner and ice cream.  First, however, Papou drove us on our date; very reminiscent of a high school dance.  Demetri and I had a really lovely dinner at Matsuhisa Athens, which lucky for us is not in Athens, but rather in Vouliagmeni, the next town over and about 10 minutes away.  It opened earlier this Spring. The restaurant sits on the water and the cocktail special was a watermelon martini – perfect for a day when you honestly believe you’re melting right where you stand.  We tried a bit of everything including the signature black cod with miso – a recipe that appears in a lot of magazines and on a lot of menus, but if I understood right, was invented by Nobu Matsuhisa himself.

Twelve years has gone by in the b 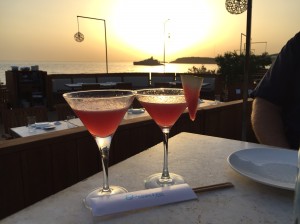 link of an eye.  We first came to Greece together in 2006 for a delayed honeymoon. While I imagined all kinds of adventures when we were first engaged and planning our life together, I could have never imagined that we’d be doing something like this.  Demetri is the smartest, funniest, most intentional person I know.  Everything he does is in the name of our family and we all owe this grand (the grandest!) adventure to him.

Demetri is running fast to get his business even more mobile than it is already.  How he’s incorporated technology and efficiency into his one person business is astounding.  Google Voice, Asana, Slack, Dropbox, Google Drive, Virtual Post Mail, Scan Snap, Venmo, Zelle … you really can work anywhere without an ounce of paper.  And with solid thinking and planning, you can get your business to a point where you can live elsewhere. He’s thinking of writing about how to do it. I’ll link when he does.

I know I’m not the first to utter this … I don’t know how we accumulated all this STUFF.  Our house is tidy enough and I am amazed that aforementioned stuff is EVERYWHERE. We sold furniture, donated toys/clothing/gear, recycled electronics … and packed most of the rest.  We sold both the cars and rented our house to a super nice family who was looking for a furnished place.  We flew to Los Angeles to visit the Greek Consulate with our visa applications and a binder with all required visa materials.  It was a 300 page, numbered and color-coded coded masterpiece; sadly the visa bequeather did not appreciate the stellar organization (and thank you Mom, Amy, Allison, Susan, Valerie, Andrea, Erin & Becky who did oooh and ahhh as I’d hoped the consulate would.). We left LA with our visas in hand and a side trip to Legoland under our belts.

Back in Denver, we rented a nifty storage unit about 5 minutes away for the stuff that our renters wouldn’t use. These indoor units are immaculate – dust free, shiny floors, locks that don’t get stuck, huge but manageable carts to transport items from car to unit.  Demetri took great care in organizing our unit that it reminds me of the little apartment showrooms at Ikea – camping stuff here, boxes of clothes there, artfully bubble wrapped frames and bicycles all lined up neatly.  Those shiny floors were extra fun for the boys who tooled around the building on their scooters with each load.