At the end of Tyler’s visit, he, Papou and Demetri spent a day downtown. Athens is empty  — the entire city is on vacation, so many stores are closed and parking is an absolute dream.

First, a visit to the Panathenaic Stadium, used for the first time in about 330 BC and the site of the revival of the Olympic games in 1896. It’s also the place, where every four years, the Olympic flame begins its journey to both winter and summer games.

Next stop, the National Archaeological Museum, with some 11,000 prehistory to late antiquity exhibits. The building itself is lovely, too. The photo above is bronze statue from the Hellenistic period; it was found on the island of Evia around 140 BC.

Then they wandered over to the neighborhood where Papou grew up and saw the house he lived in with his parents and 2 sisters. An excavation has been going on for many years where the house was.  Some relics/antiques have been found, but it can take the Greek state many years to determine what they are.  It’s a law that they do so with any excavation.  You can imagine the jokes and giggles about Papou’s house being an archaeological dig. “You’re so old that ….”

Then they saw the shop where the family bakery used to be. It’s now an apartment building, but in the 40s and 50s, it was a neighborhood bakery. Often, neighbors brought things to the Fefes bakery to cook in their large oven. It was a very common community practice & might still be. During the occupation, Nazi soldiers were in an out of the bakery and always in the streets, never kind to the Greek people.  One day, as Papou was running home from the bakery, he literally ran into a solider, who was irritated enough to knock him down in retaliation.  Papou couldn’t have been older than Michael when this happened and like any little boy would be, he was afraid.

Needing snacks, they stopped for bougatsa, which is phyllo dough wrapped around a filling.  I believe the most common are a sweet cheese filling with cinnamon and powdered sugar on top, served hot.  There are also savory fillings like chicken and ham. This particular bougatsa cafe is in a lovely shaded spot surrounded by trees and bougainvillea.  We visited last summer.

We ended the day together, at a fish tavern on the sea south of Voula, with special guest star Andreas, Demetri’s first cousin.

Tyler departed yesterday, the 17th.  We swam, catching crabs and urchins and trying for fish with our nets, and then filled his belly with souvlaki before he headed back to the US. 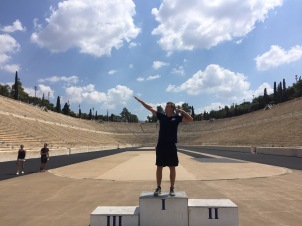 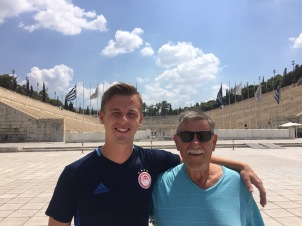