We started our day at Cafe Central, which opened in 1887.  It’s a beautiful spot on a corner with lots to watch.  Many famous Hungarian authors and artists spent time here, and they encourage today’s patrons to write and share their creativity as well.  Michael was hard at work on a new chapter of “Captain Pancake” in between bites of Dobos Torte, an eight layer sponge cake with chocolate buttercream between each layer and a caramel ‘fan’ on top.

From there, we walked to the Central Market, the largest indoor market in the city.  It’s a big tourist destination, but it’s also filled with locals doing their shopping — produce, paprika, meats, cheese.  We bought a basket of fat juicy blackberries and and went upstairs for sausage and stuffed cabbage.  From there, we walked to a playground for a break and then ventured across Liberty Bridge to swim at the Gellert Baths.

In 1896, Budapest celebrated its millennium,  and much of the whole city was constructed for this massive celebration.  Liberty Bridge was one of these monuments, in addition to the Millennium Underground Railway, the second oldest underground railway in the world (after London).  Other attractions built for the anniversary include the City Park and the Grand Boulevard and the monuments in Heroes’ Square.  Historians note 1896 is when the city became a modern metropolis; certainly these construction projects are what formed the current image of Budapest.

Budapest is full of thermal springs — some date back to Roman times and some were built by Turks.  We visited Gellert Bath, just over Liberty Bridge, which has indoor and outdoor pools, an outdoor geothermal bath, two indoor geothermal baths and beautiful grounds and flowers surrounding it all. Gellert probably has the most tourists — we heard German, French, Italian, English, and American. (We’ve determined that ‘American’ really is a language all its own).

From Gellert, which is at the bottom of the Buda hill side, we took a taxi up to Fisherman’s Bastion and Matthias Church.  Fisherman’s Bastion was built as a viewing terrace also for the 1896 millennium.  It has monuments and statues of kings and saints, but most significant is what you can see while you’re up there — the beautiful Danube, the Parliament building, all of the bridges.  These walls are new, but from medieval times through the 18th century, there were thick castle walls here — which were often destroyed and rebuilt after sieges by Turks, Austrians, Nazis and Russians.  Matthias Church is officially named the Church of Our Lady — it’s catholic, and was named after King Matthias.  Several coronations and royal weddings were held here. Buda Hill is also home to the national art museum, the castle itself, an old Carmelite monastery and the national archives.  It is a lovely spot with pretty buildings and great views.

We ended our day back on the Pest side with dinner at a traditional Hungarian restaurant — chicken paprikash, Wiener schnitzel (ok, that might be more Austrian …) lemon chicken.  After a nine-mile day, we crashed fast. 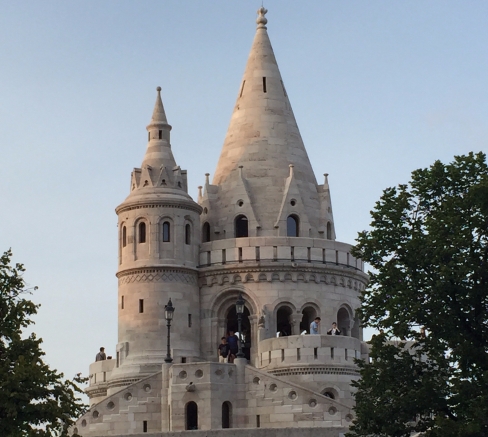 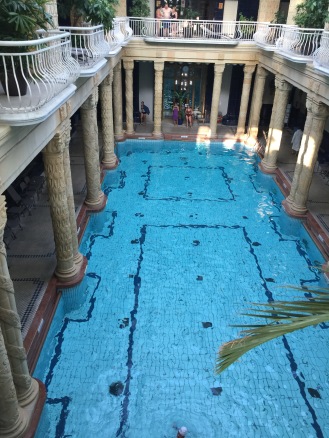 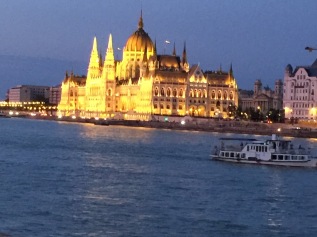 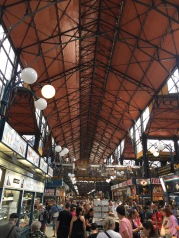