On October 24, the torch for the 2018 winter games was lit in the city of Olympia and began its week long journey across Greece.  505 different torchbearers ran the relay with 20+ welcoming ceremonies in different cities around the country.  Monday, the torch arrived at the Acropolis, and yesterday, the final hand off ceremony was held in downtown Athens at the Panathenaic Stadium, the site of the first modern Olympic games in 1896.

The torch relay spreads a message of friendship, solidarity and peace around the world.  Yesterday’s ceremony began with a dance routine from the Greek gymnastics team Olympiada Thakomakedonon. Then, Korean dancers and singers performed, followed by the Greek presidential guard raising the Olympic, Greek and South Korean flags, and finally a youth choir sang the national anthems of Greece and South Korea.  At that point, the flame entered the stadium, carried by a South Korean gold medalist speed skater.  He handed it to a Greek olympic skier who lapped it around the stadium before lighting the cauldron.  Greek and South Korean dignitaries both spoke — in Greek, English and Korean — about the honor the games brings to the world and to their countries.

The ceremony was not very crowded, but it was certainly international.  Around me I heard French, Korean, Italian, English and Greek.  A few school groups were there in uniform and waving Greek flags.  There were also a lot of Korean folks there, waving flags and cheering loudly.  It was 90 minutes of pure joy and I had tears in my eyes more than once.

After the ceremony, Demetri made his way down to meet the Greek American runner, Dean Karnazes, who was one of the torch bearers and another Greek athlete.  (Go to Demetri’s facebook page to see his photos and videos — he had the ‘real’ camera and they’re great!)

The flame lands in South Korea today to begin its 100-day journey to PyeongChang. 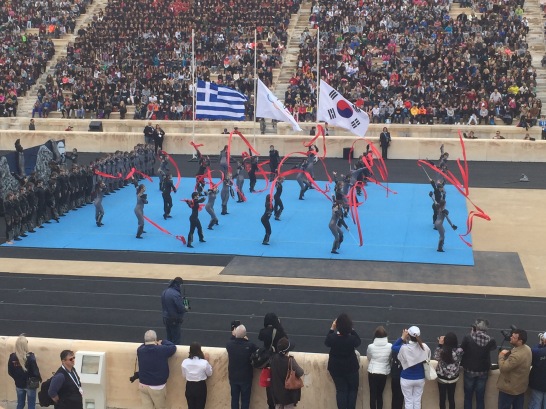 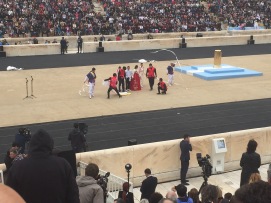