Michael turned 8 on November 14, so we spent a few days in the home of waffles and chocolate, two of his favorite foods.  Thanks to a school holiday in observance of 17 November, we had a three day weekend; we turned it into 4 and let the kids ditch a day of school.

We arrived in the old town of Brussels early afternoon, checked into our apartment and bundled up to go explore the city.  Christmas preparations are in serious progress — the little stalls for the markets are in place, an enormous tree got placed in the center of the Grand Place, and decorations are popping up everywhere.  It would have been fun to be there this weekend instead to see all the holiday glory.

It was chilly and grey but not bone-chilling.  Lots of plants were still alive — geraniums and pansies and other greenery looked happy right along side the pine garland.  We found a frites stand and shared some on a bench, with mayonnaise just like the Belgians do it.  Michael and Peter stuck with ketchup.  There was a waffle stand conveniently next to the frites, so the boys enjoyed a Belgian waffle.  They are works of art.  Then we wandered and explored the old parts of the city, found the Mannekin Pis, walked in and out of chocolate shops, through alleys, into a bookstore and then ducked into the Delirium Brewery for 2 beers (or was it 4?), 2 strawberry juices, 2 games of go fish and 4 rounds of photos in the booth next to our table.  Delirium’s Tremens is my new favorite beer, and yes it’s probably because of the pink elephant. I found out later that delirium tremens is actually a medical condition caused by a rapid withdrawal from alcohol.  These Belgians are quite funny – statues of things peeing throughout the city their award winning beer is named for alcohol withdrawal.

We had moules for dinner in Chez Leon, a Brussels institution. They were great.  Peter fell asleep with his head on Demetri’s lap.  The manager gave me a photo from 1904 of the entire restaurant staff (the Leon family); they’re on their 7th generation of leadership.

Friday morning we hopped the train to Bruges, which is more beautiful and fairytale-esque than Prague.  The city was occupied by the Germans in both World Wars but escaped major damage.  Markt Square is huge and gorgeous (also setting up Christmas markets, skating rink and the big tree) and looks like the old Europe visions in your head.  Its most famous landmark is a 13th century church belfry that has 48 carillons in it — with a talented, enthusiastic carillon player who delights the city with song after song. At one point he played Despacito, which was utterly amazing and hilarious.  In the middle ages, Bruges was the second largest and most important port in Europe and the city sits on canals like Amsterdam and Venice.  We took a boat ride around the city and saw the sites from the water.  A Michelangelo statue of Madonna and Child is housed in the Church of our Lady (Notre Dame) and there’s a medieval hospital that is now a museum and we saw a Picasso and Miro exhibit there.  We had a lovely lunch in a bistro off Markt Square and dinner in another fabulous little bistro where we got the very last table.

Saturday we wandered into a few more chocolate shops, took a carriage ride at Peter’s request, and hopped back on the train to Ghent, which is only slightly less beautiful than Bruges. It’s a university town and quite large, but the center of the old city is quite near the train station, so we locked our duffels up and jumped on the tram headed for the Gravensteen Castle.

Built by Philip of Alsace in 1180, Gravensteen was restored in the 19th century.  It’s humongous and the self-guided tour takes you through almost the whole thing.  There are a couple of rooms set up as torture chambers — a guillotine sits in the center of one of these rooms and there are displays of daggers, knives, axes around it, and a model of someone with his hands behind his back and a funnel in his mouth.  Michael’s artwork for the next couple of days was most certainly influenced by this visit, as he drew a guillotine with great detail, including the bag that sits in front that catches the heads.

We had more french fries on the street, a beer in an adorable bar and a waffle a few blocks down.  Nobody believed me but agreed in the end that a hot, plain waffle was much tastier than one covered in whipped cream or nutella.  We walked down Graffiti street, past more chocolate shops and churches, and boarded the train back to Brussels when it got dark.  We walked the 2 miles from the train station to our hotel near the EU and UN headquarters, passing the palaces and the city parks along the way.

Early Sunday morning, Peter rolled off his bed and hit his mouth on the nightstand. He chipped his right front tooth, cut his lip and did something on the left side, maybe just an injury to the gum or maybe to the tooth itself.  Poor fella, not the nicest way to wake up.

We’re back in Voula and coming down off the carb high. Peter’s mouth is much better; the pain and swelling has reduced considerably and the tooth is not moving. The pediatrician said it sounds like just a cut and reminded me that this is a baby tooth so even if it’s damaged, it’s not long for this world anyway. And then she gave me the name of a dentist. 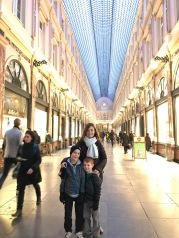 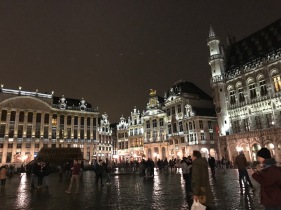 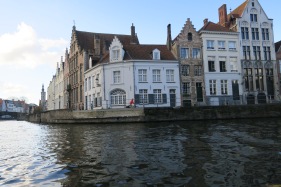 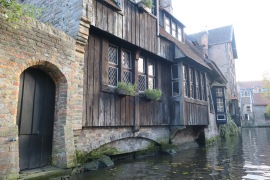 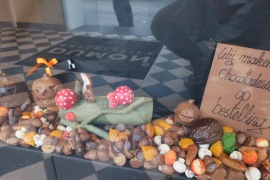 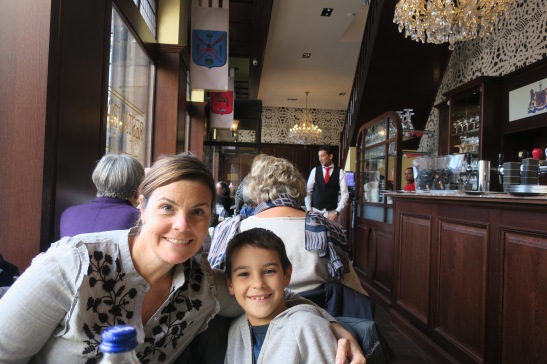 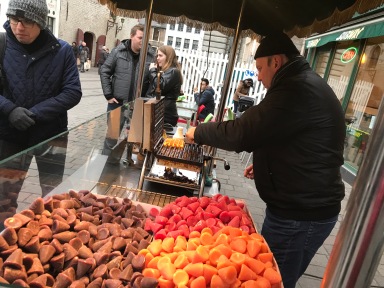