Christmas has arrived.  The pageantry is by far our most favorite part of the holiday season and Athens is more decorated than we expected in light of the financial problems.  We’ve watched the crews hang lights all over Voula and Vouliagmeni during our morning runs by the sea.  It does seem kind of odd to have Christmas lights on palm trees, but that’s likely just a lack of exposure (mine). They still look festive.

Last Friday (8 Dec), there was a celebration in the Voula square  — games and bubble tricks for the kids, a local choir singing carols in Greek and then the lighting of the square’s Christmas tree followed by … fireworks right over our heads! The square is very festive looking and lots of fun.  The boys found a friend from basketball and ran around with him for an hour or more.

In downtown Athens, the Attica department store has its windows decorated for the holidays, lights are strung across the streets and the tree in Syntagma square was lit this week.  We took the metro into Athens last weekend to get our city holiday on, and ended with a hot chocolate in the gorgeous lobby of the Grand Bretagne hotel.

It is full-on Christmas here — not ‘holidays’.  98% of the Greek population is Christian Orthodox, and even though the Greek State and the Orthodox Church are technically separated, the separation is not regulated and the Church has a lot of power in Greek society.  Greece spent hundreds of years occupied and controlled by Turks or Venetians or others and during those times, orthodoxy was something that defined Greek nationality. The church made great efforts to preserve Greek language, culture, traditions and the Orthodox faith. By preserving the faith, they also preserved the religious conscience and the feeling of affiliation.  So while it’s odd for Americans to see religious symbols in public buildings, schools, subway signs, the history behind it makes it more understandable.

The remaining 2%? More than half are Muslim and the rest are Catholics, Jews and Jehovah’s Witnesses. The Catholics are largely populated on Syros (it was the only Cycladic island never inhabited by the Turks — the Venetians had it), and there is a significant Jewish population in Thessaloniki, Greece’s 2nd largest city.

Greek orthodoxy celebrates Christmas a bit differently. Midnight mass on Christmas Eve and then Christmas Day is usually a family dinner of some sort.  The Greek version of Santa, Agios Vasilis/St. Basil the Great, brings gifts on New Year’s Eve.  This makes the boys’ heads spin.  Will Santa find them on Christmas or will Ag. Vasilis come instead a week later?  Frankie, our elf, managed to find us. Complicating the matter is that we will not be in Greece for Christmas or St. Vasilis Day, so what does THAT mean?  We’ll just have to see what happens….

Our school held their Christmas Bazaar last night, 15 December.  There was an entire classroom for cookies and sweets, and the upper school was walking around auctioning off dozens of full cakes and loaves of tsoureki.  Each class was in the gym selling their Christmas crafts. We came home with little goodies which is terrific as we don’t have many decorations.

The Nipiagogeio (kindergarten) held a play titled “Who Kidnapped Agios Vasillis?” about, you guessed it, the kidnapping of Santa.  Over the years, Agios Vasillis has morphed into “the Greek Santa,” likely out of commercialization.  In reality, Agios Vasillis is a tallish, skinnyish fellow with a long beard who comes from the east.  His story is similar to that of St. Nicholas, who helped the poor and needy.  He died on January 1, 379 AD and the orthodox church celebrates his name day then.

The play was hilarious. The kidnappers, the head elf, and Santa were all played by teachers. Peter had two roles, one as a kid affected by the kidnapping, and one as an evil scientist who was on a team of interrogators with Santa in captivity.  He had 4-5 speaking parts, all but one in Greek.  We all cracked up when he asked Santa just exactly how he gets down the chimney.  (“πωσ περνασ μεσα απο ‘κι καμιναδεσ?”) Sounded like a native speaker. And he winked at us a few times from the stage.

In other Peter news, we went to the doctor one evening this week for coughs and pink eye.  The next day, Demetri got a call from Peter’s teacher asking if Peter indeed went to the doctor because he swallowed a fly and it laid eggs in his throat.  Demetri assured her that only the first part of the story was true and explained how we are really working on our imaginations in our nighttime storytelling.

We absolutely love all the cards we’re getting from our friends and family. Thank you all so much for thinking of us and sending them all the way to Greece. 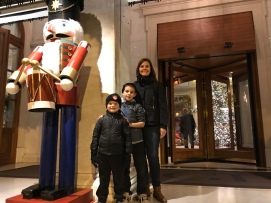 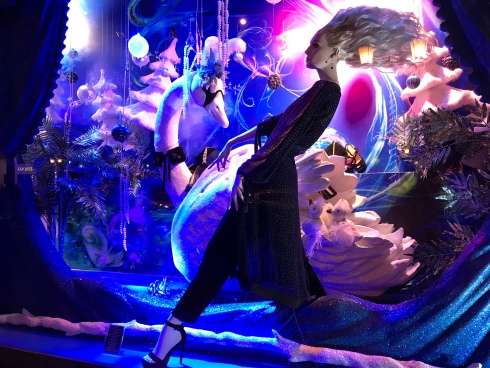