The Dolomites sure are pretty as you fly over them. Snow-capped and rugged, they look like perfect peaks of meringue from the sky.

This is my first time in Venice; Demetri’s second. For others who have been here, you know that getting to the main city is a planes/trains/automobiles combo since there are no cars in the city.  We took a bus to the vaporetto (the public transportation boats), through the Grand Canal and arrived at Piazza San Marco. As we entered the square, someone put food in Peter’s hand and three pigeons landed on his arm to eat. The man did it again and three more pigeons came and this time one of them was flapping its wings in Peter’s face. (Eeuuw.) Later he reported his surprise at how heavy they were.   We crossed through the Piazza, past the Doges Palace and Basilica of San Marco – beautiful with its mosaic floors, gold on the ceiling and lots of treasures pillaged from other cities around Europe and Turkey during the Crusades – and boarded the boat to our hotel on Giudecca island, opposite the Rialto/San Marco neighborhoods.

We arrived Christmas Eve and at check-in were given one heck of an upgrade to a beautiful suite with its own Jacuzzi and roof access. The living room had windows on two sides overlooking the water and the San Marco neighborhood on the main island.  We had a lovely dinner that night at the hotel – traditional fish for Christmas Eve, pasta for the kids and a lovely glass of wine, plus all the panettone we wanted.

We found some chocolates to leave for Santa and poured him a glass of San Pellegrino. The boys went to sleep confident that because Frankie, our elf, had found us in both Athens AND Budapest, Santa would make it.

And he did, leaving gifts for the kids in front of the fireplace.

Christmas Day was a quiet day in our lovely room.  The hotel served cookies at breakfast, plus hot chocolate with blue marshmallows and popcorn handed out by a thin Santa hailing from Morocco.  Must be a summer place?  Demetri and I both went for a run, through the deserted streets and over bridges.  There were a couple of trattorias open and some laundry hanging here and there, but otherwise the island felt completely desolate.

The 26th was St. Stephen’s Day, so pretty much all the same stuff was closed.  It was our day to see everything … so we started on Murano island to see a glassblowing demonstration.  We got tickets weeks ago but when we got there it was all locked up.  We went to the Murano museum instead, and that was excellent.  We had a snack and boarded the vaporetto back to San Marco, where we walked to the Rialto Bridge and wound our way through the streets, into La Fenice (opera house) and back to San Marco and into the Basilica, then went for dinner. It was cloudy and rainy most of our time there, but the fog and clouds give Venice an even more magical appearance.  Though a sunny, springtime gondola cruise would be pretty awesome.

Today on my run, it was cool to see the butcher, post office, fish market and produce stands all open.  (Demetri ran early – in the dark – so he saw them start to open as he looped back). Then we toured the Grand Canal one last time – destination train station.  Next stop, Milano. 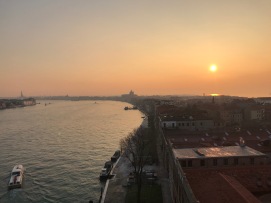 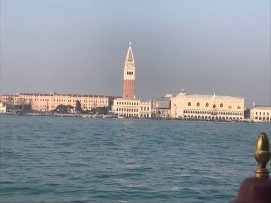 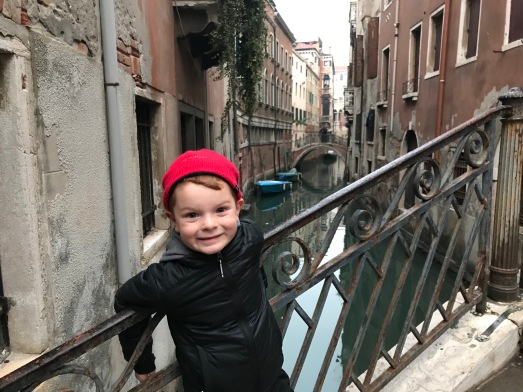