An Italian told me that Milan used to be only a ‘business’ city.  Some Italians liked it that way – maybe they felt they had this gorgeous place all to themselves while there for work.  While still very much a business city (it’s said that for every church in Florence there’s a bank in Milan), it felt very livable. Demetri thought it felt like Paris mixed with Chicago. The apartment buildings are grand, public transport is easy and clean, people are polite, traffic moves at a sensible pace, it’s busy but not packed (except for the center), it has nice parks and dog parks and a neighborly feel.

We arrived from Venice in the pouring rain, taking the subway from the train station to the stop near our apartment.  We came inside, changed into some dry clothes and went back out again to see the cathedral (Duomo), La Scala, the statue of Leonardo DaVinci and the Galleria, one of the most majestic and oldest shopping malls, built in 1867. The Duomo is spectacular, with 3600 statues and 135 spires on top of the cathedral. It’s the third largest Gothic cathedral in the world.

Leonardo DaVinci left Florence for Milan and worked there from 1482-1499. The Duke of Milan lured him north and commissioned him to do several things – and in his CV, Leonardo told the Duke all the things he could engineer, design and build  … and oh, by the way he could paint too, you know, if he needed that.  We visited a DaVinci museum that had some super interactive displays and a really cool digital restoration of DaVinci’s Last Supper with stories about all the apostles and why they were painted as they were.  DaVinci’s ‘real’ Last Supper is hanging in the Basilica of Santa Maria Della Grazi, a plain looking church just a block from our apartment.

We also visited one of the libraries that houses many of Leonardo’s papers and notebooks. It’s also home to a giant sketch (the museum called it a ‘cartoon’) of Raphael’s School of Athens, Demetri’s #1 fave, but sadly they are in the middle of restoring it, so we only got to see a movie about the restoration and a digital photo of it.  Interestingly, the sketch is about twice the size of the painting hanging in the Vatican.

The boys were fascinated by three frescoes that told the story of Noah in the church of San Maurizio al Monastero Maggiore. The docent grabbed us saying he had something for ‘the bambini’.  The animals were painted in great detail and there were hundreds of them.  He spoke to us in Italian, but thanks to his hand gestures and a few words I know,  we heard the story.  Much to the boys’ surprise, a set of unicorns were third in line up the ramp, so that set off a long discussion. I’ve been saying for years that unicorns don’t exist because they never made it onto the Ark.  Now I need to find out why they got out of line if they were so close to the entrance.

We had some great morning runs through the city center to Sforza Castle and the park behind it, past lots of little and big churches, past the Science/Technology Museum and through the neighborhood where we stayed. Michael had a random puke one morning so we got a later start than planned after washing sheets and pajamas and so forth.  We ate well: Risotto Milanese, paninis with a choice of one out of four types of prosciutto, artichokes everywhere and beautiful panettone cakes, traditional for Christmas that originated in Milan.

Walter Isaccson’s biography of Leonardo DaVinci is really worth reading — or listening to on Audible.

We took the #10 antique tram the long way through the city to sightsee on our way out of town. Tyler met us at the Milan train terminal – he flew in from NY that morning – and we set off together for Florence.

Once Tyler arrived, Peter refused to hold anyone else’s hand. 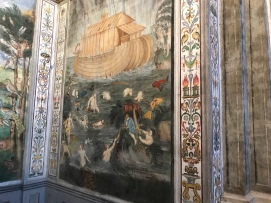 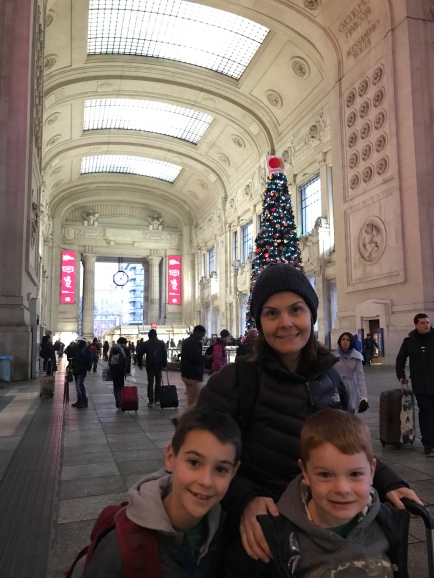 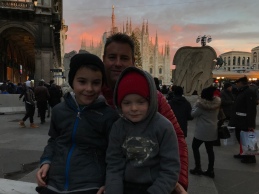